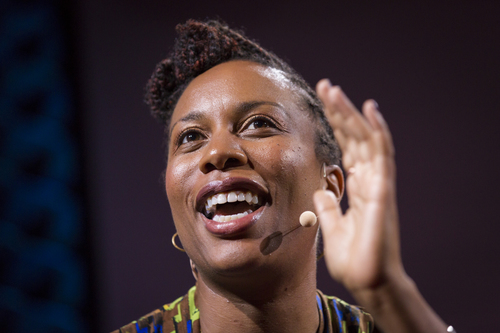 Dawn J. Fraser is a storyteller, educator and nationally acclaimed speaker from San Jose, California. She is the Host and Creator of Barbershop Stories, which features some of New York’s bravest storytellers, comedians, and memoirists, as they tell live stories… then she chops off their hair. Dawn has developed programs and speeches about the nature of stories to engage, inspire, and enhance leadership potential, and through her firm Envision Admissions has consulted thousands of students to utilize personal narratives as part of their college and graduate school application strategy. She is currently a storytelling instructor with The Moth’s Community Program, and was featured as a speaker amongst some of the nation’s top innovators and change makers at TED@NYC.

Dawn is one of the Co-Founders of Art in Action (currently a division of the nonprofit United Roots Oakland) and has worked on cultural advocacy and leadership programs in countries including Brazil, Ghana, and Kenya. Her own stories about growing up as a twin and a first generation Trinidadian have been featured on shows including the The Moth Mainstage, The Soundtrack Series, Story Collider and the Unchained Tour.

As an educator and corporate trainer, she has worked with notable clients and companies including Novartis, Mass Mutual, Prudential, and Google. Dawn received her Masters in Public Policy at Harvard University, where she was the recipient of the Barbara Jordan Award for Women’s Leadership due to her commitment to building community and serving as a role model for women aspiring to be leaders. She loves being a twin, a Trinidadian and tweetable @dawnjfraser.